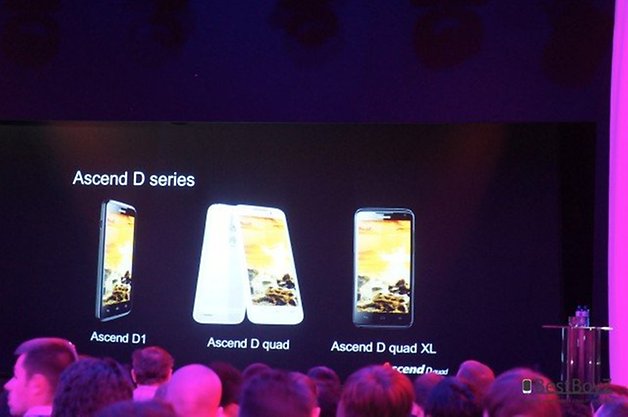 At todays press conference at the "pre" MWC, Huawei announced the Ascend D Quad, which, to quote Huawei, is "the worlds fastest smartphone". AndroidPIt was there live covering the press conference, and with the release of a new quad core processor, the new Ascend D mobile series, and a new quad core tablet, they have definetely made big noise at the start of MWC!

In order to achieve such speed, Huawei decided to build their very own quad core processor, which has 16 GPU cores designed to ensure optimal graphics. "Speed, long battery life, and very high demands for sound and videoare what we are focusing on," says Richard Yu, chairman of Huawei. According to them, the processor is FOUR times more powerful than Tegra 3 quad core processors. WOW.

Our first impression of the device is indeed a very good one. Huawei has introduced various benchmark tests to compare against competitor hardware, and seems to have a lot of confidence in the new processor and product line.From what we have seen so far, energy efficiency, speed, and display all seem to be top notch, and we're anxious to spend some more time with the new quad core phone to see if its "in hand daily use" matches that of its impressive demo.

The device will be available both in a 1.2 GHz and 1.5 GHz version. Here's a quick spec rundown:

No word on price, but we'll do our best to get our hands on some more information. What do you guys think? Impressive?