To start off, I come from an Android 1.6 T-Mobile G1, so I'm going to be fairly picky about certain aspects, but I think that is the case for just about anyone reviewing a new device they are not accustomed to. Make no mistake, this is an entry level Android phone. This phone is small, smaller than the HTC Wildfire in some respects. It also doesn't really look like anything else out on the market right now. 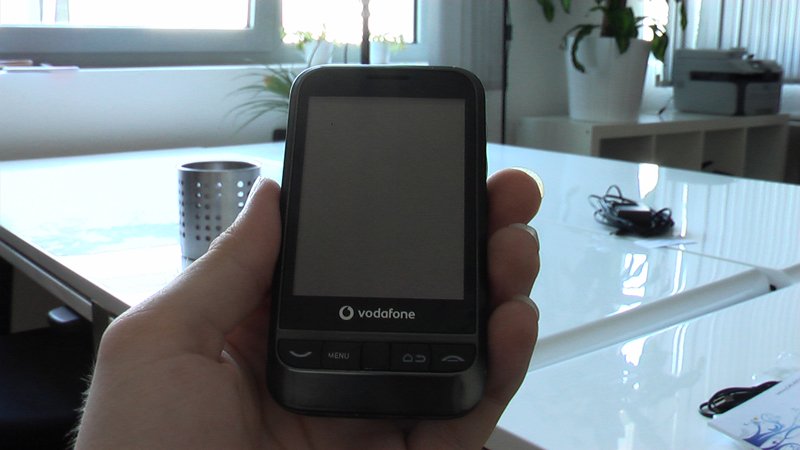 The packaging for the Vodafone 845 is nothing to special. The phone comes with a Quick Start Guide (and some other pamphlets), some sort of wall plug-in with a USB port to charge the phone that doesn't fit outlets here in Germany, and wouldn't fit anything back in the States. The phone also comes with ear-buds and a USB to micro-USB cable. 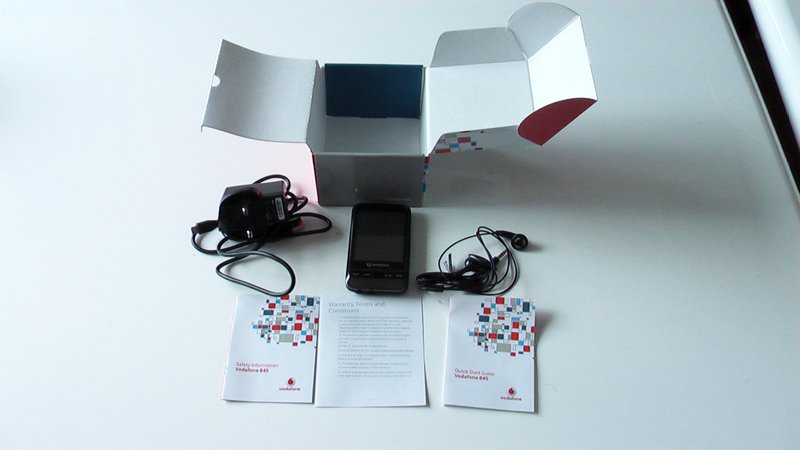 The phone (built by Huawei) is small, which I'm sure will appeal to some. The Vodafone 845 has a metallic housing on the front side, and some sort of non-metal material for the back cover, which I find is easy to maintain my grip with. The five plastic buttons on the front of the device are: call, menu, trackpad, home/back, and end call buttons pushed together in a row. The volume rocker and the power button are polished metal controls that adds a nice touch of style to the rest of the design. 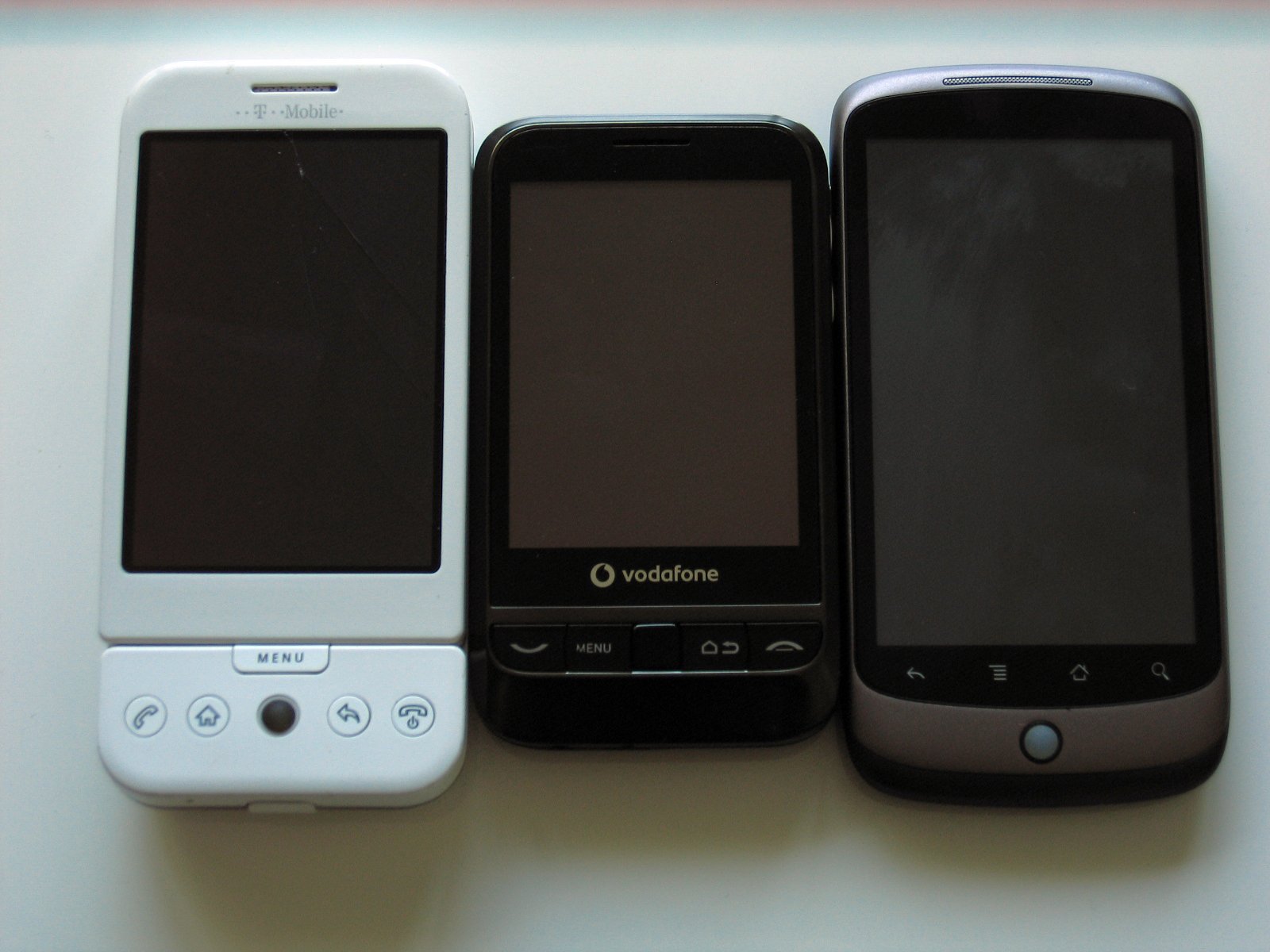 The 845 doesn't have a dedicated button to activate the camera, which makes taking pictures a little bit more of a hassle than my G1. The trackpad does function as a capture button, but I think that using the button makes the phone shake too much, blurring the photos. Continuing on the button topic, the power button at the top is very small and initially evaded my search for it. The volume rocker is not really too sensitive to pressure, but the fact that it sticks out fairly far from the body often results in the volume levels changing while the phone is in my pocket amongst other things.

From the first couple seconds with the device, I had a very hard time getting the back cover off the phone, and at times was worried I might break it. The microSD card slot, which only supports cards up to 16GB, is under the case, making it hard to access.

I initially saw the 3.5mm audio jack and said “finally, I can listen to music on my phone without having to buy some accessory.” Listening to radio in the office (or any relatively quiet place), it pumps out enough juice to allow me to listen to music on my headset, but when I step out into the city, the background noise makes it, at best, a challenge to understand what is being said. The story may likely be different with earbuds, but I don't like to use those.

The device sports a 3.5mm audio port and an FM radio that picks up all the major station here in Berlin. The 3.2MP camera does not have a great quality lens, but it has several different photo color settings to choose from, as well as preselected white balance settings for several light conditions. 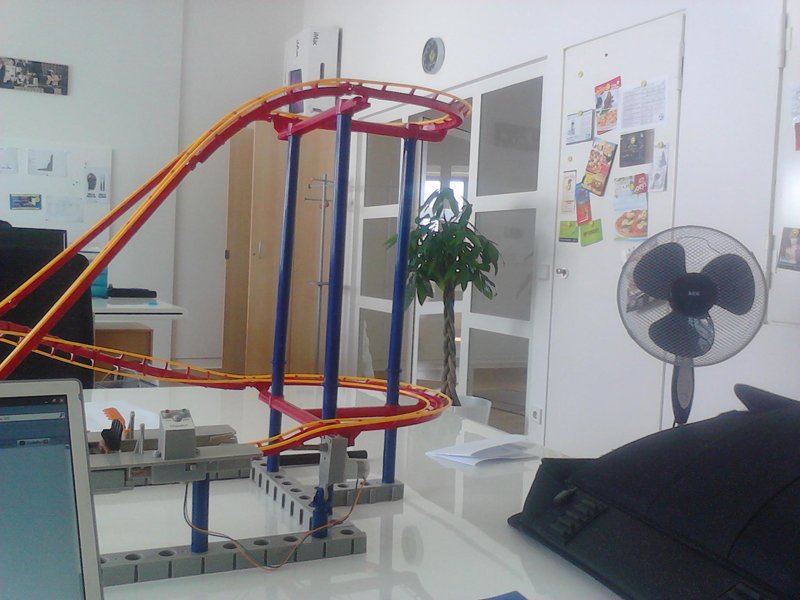 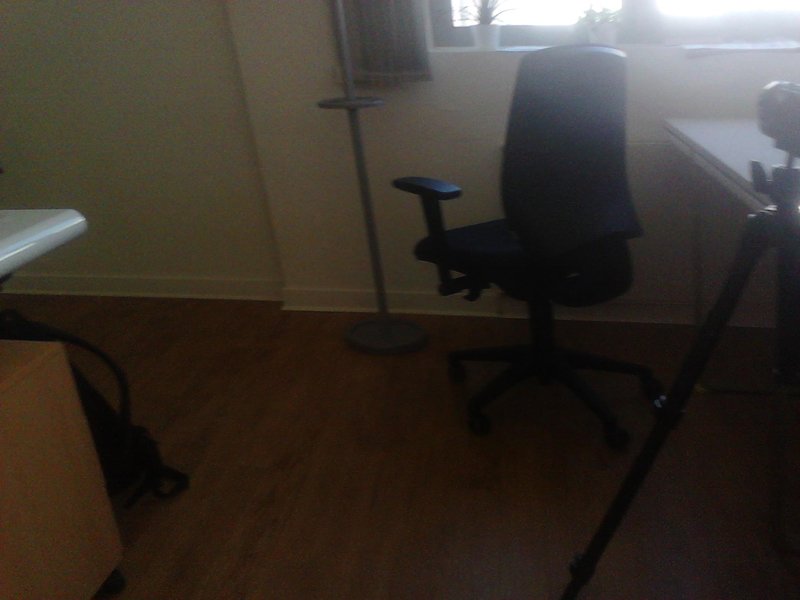 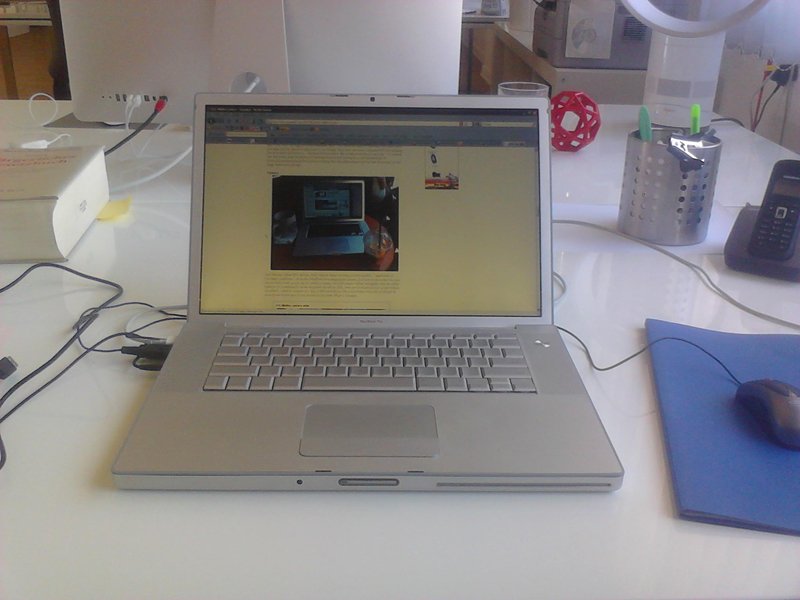 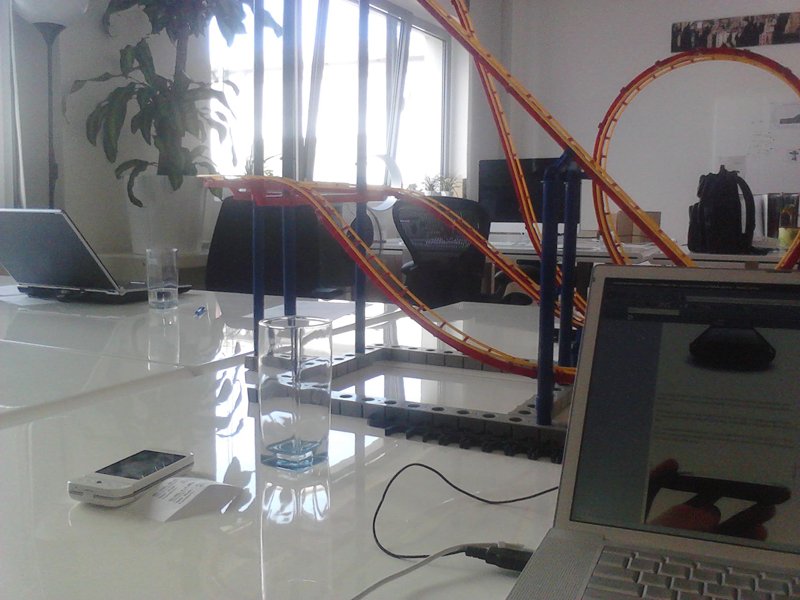 The camera takes decent quality pictures, but the lens cover lays flush on the surface that you lay the phone on, which has me concerned that it could get scratched easily. A flash for the camera would be a welcome addition. The video capture mode functions, but the videos taken are small and choppy.

To say the phone's design is individual is an understatement in my opinion. One person commented to me that it looks like the phone's outside was designed in the 80s. Combining the home button and back key is definitely not something I would have done, as there are plenty of occasions where having separate buttons is more convenient. Placing the 3.5mm audio jack and the microUSB port next to each other on the bottom was a good choice though. 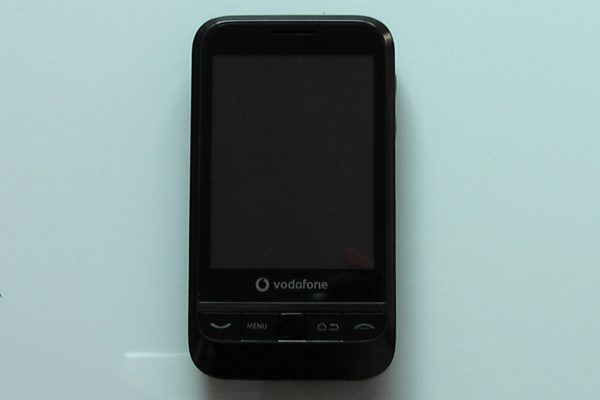 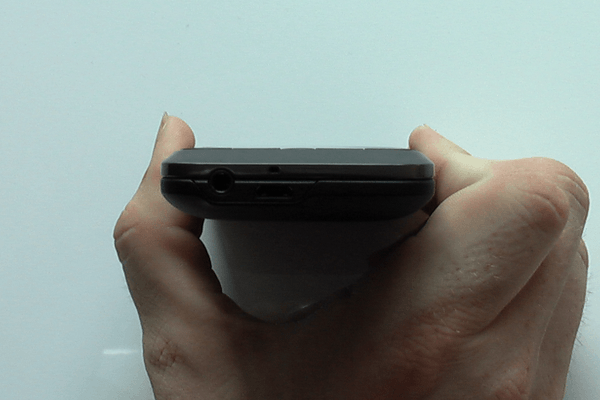 The Vodafone 845 is a rarity in entry-level Android devices in that it sport some strange custom UI (probably from Huawei) of Android 2.1. The phone comes with plenty of home screens, and you can add home screens both vertically and horizontally. Interestingly, I think that this phone may have an exclusive feature to support hundreds (or more) of home screens, as I was able to continually create new home screens left, right, up and down. While that ability would have uses in higher end phones with more storage, RAM, and processor power, I feel that it is overkill in the 845. A convenient aspect of the phone is that icons for the dialer, mail, menu, and home screens switcher always stay at the bottom of the home screen. 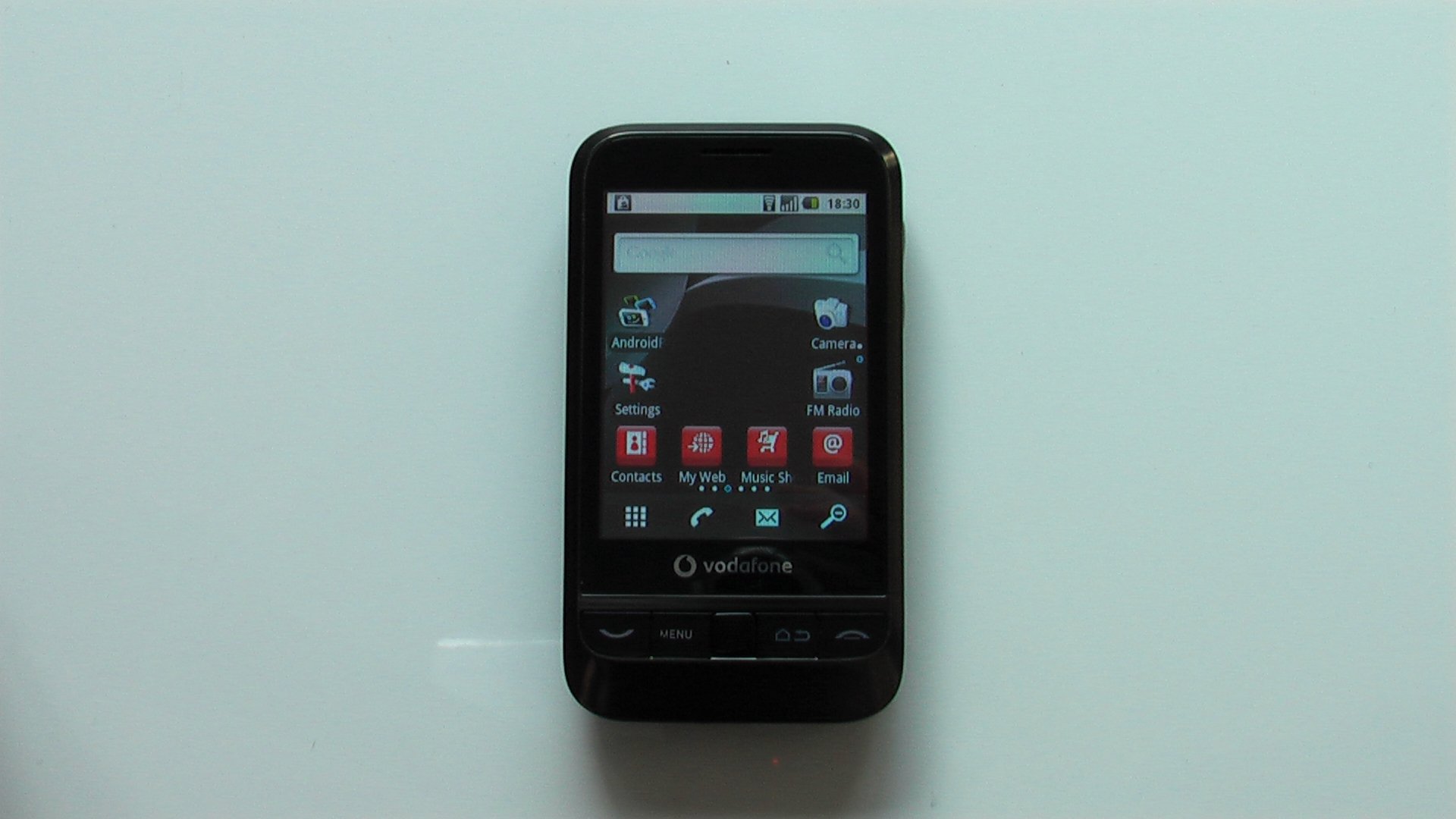 Now it's time for my biggest gripe: the display. This phone is small, and so is the display. At only 240 x 320 pixels, it is easy to make out the individual pixels. When trying to type the letters at the edge of the display, I had to press partway off the touchscreen, and even that didn't guarantee I'd still get the right letter. In fact, I think that almost every single letter typed was wrong the first time, and when you consider that the backspace button is just as hard to select, you can start understanding just how frustrating it is to type on this device. The screen as a whole is not very responsive. From what I have read, the touchscreen is resistive, which allows use of input from objects besides my body (like a stlyus), but it results in less precision and sensitivity to my gestures. In addition, the outer display appears to not be constructed from glass but of plastic, as pushing lightly on it results in the display bending in at the point of pressure. 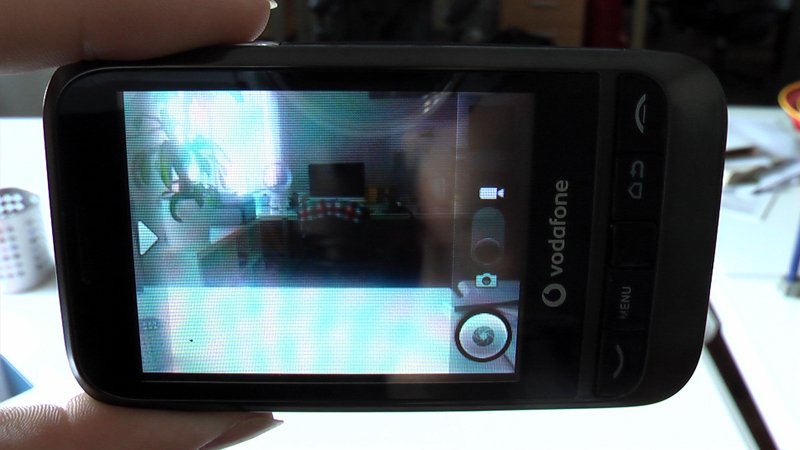 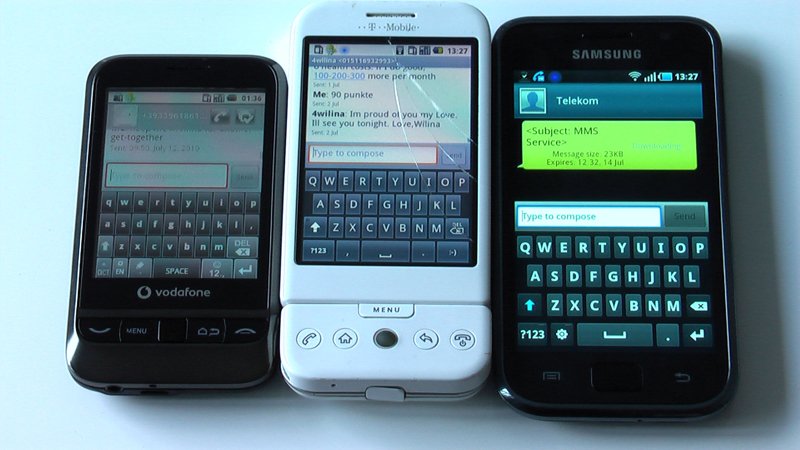 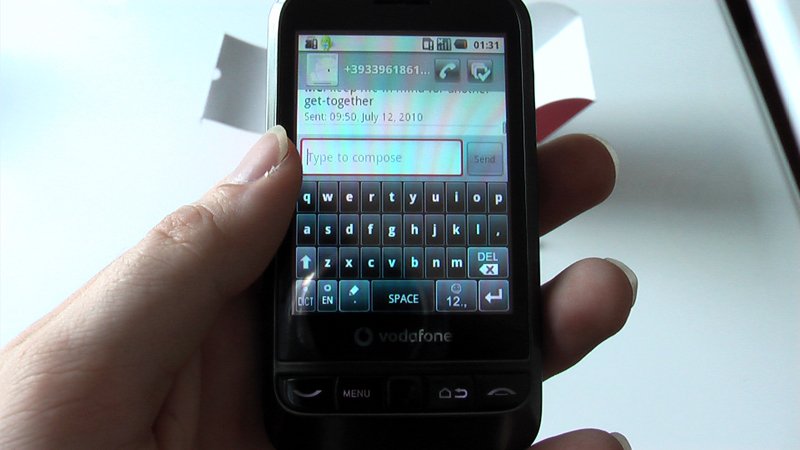 The small size of the screen also prevents me from installing some of my favorite apps from my G1 onto the device, such as Berlin City and Map Droyd, and that hurts. The display just doesn't compare with almost any other device in terms of usability, precision, sensitivity, sharpness, and size.

In terms of battery life, based on what I have already experienced, the 1200 mAh batter has more than enough juice to power this phone for extended periods of my typical usage. Finally, the display, though small, was able to remain readable at the highest setting in direct sunlight in the late afternoon in the summertime, or likely at all times if it is cloudy. 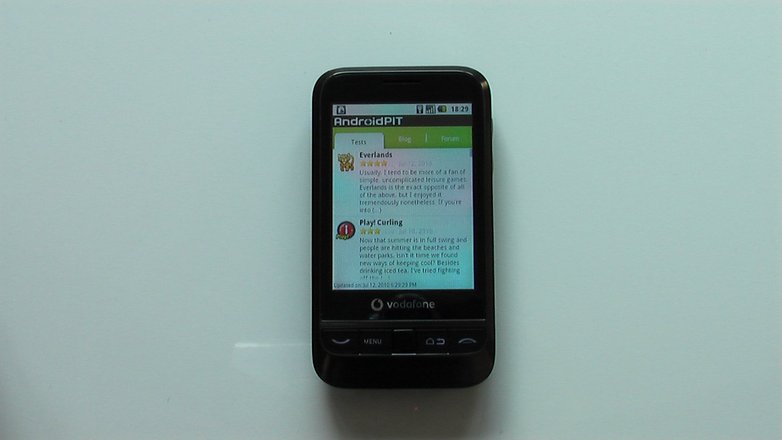 Perhaps this phone's biggest strength is it's price: free on pay monthly plans from £15. At that price, there has to be some individuals out there interested in the handset.

The whole Android experience on the Vodafone 845 is slow, likely due to the low spec processor and 128MB of RAM. Several times I day I get a message telling me that some program is not responding, and it asks me whether I want to close the app, or wait. Luckily, it usually justs needs an extra second or two. There is also a noise that sounds like a fan mixed with electronic static that comes out of the speakerphone opening on the back on occasion. I tried to record it, but is hard to reproduce on demand. 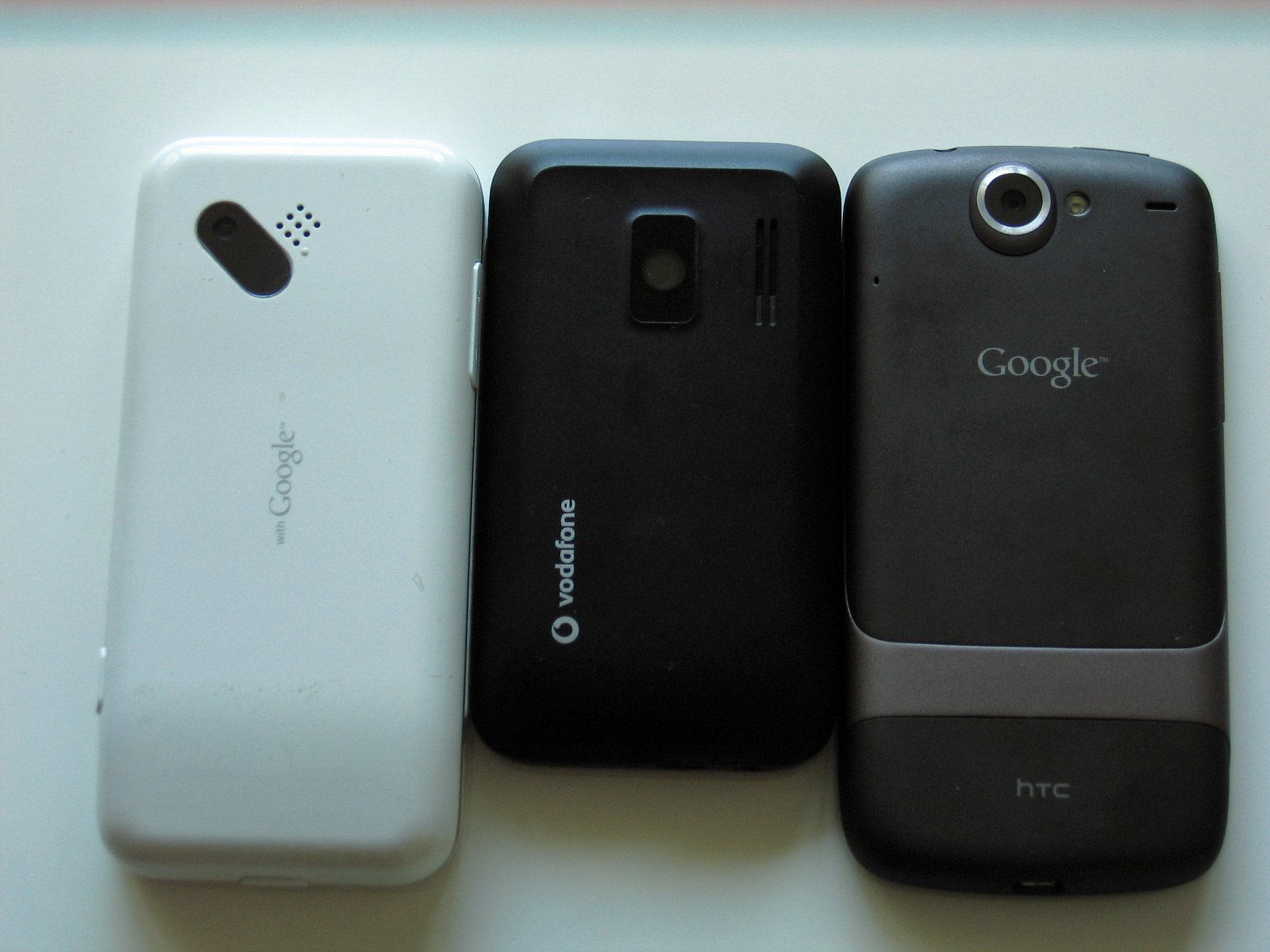 You get what you pay for with this device. The 845 is a cheap phone, and because of that, the features are not going to be as polished as the medium to high end devices out there. I feel like my G1 does a better job at meeting my needs than the 845 does, but that may very well be due to my familiarity with the G1, and the two extra buttons available. I definitely think this phone needs to have a better quality and larger touchscreen. A significant problem for me is that a lot of my old apps that I like aren't supported on this device, probably due to the small screen size. What may be a saving grace for some buyers is the price, which is, according to Vodafone UK's site, free on monthly plans from £15.

The bottom line is that the Vodafone 845 is a small, dirt cheap, entry level Android phone for individuals not concerned with specs. It has some nice features and runs Android 2.1. The phone feels unfinished, like it left the design floor before all the details were thought out. As long as you don't ask for much out of the device, you won't get let down often.