We use cookies on our websites. Information about cookies and how you can object to the use of cookies at any time or end their use can be found in our privacy policy.
To the AndroidPIT homepage
Login
Tristan IABS
Forum posts: 16

I am a big fan of Android game, but have always being in a situation where I want to play a game, I couldn’t use my phone or my battery is going to die. Sometimes I even couldn't enjoy some fancy games because of small screen but thick fingers...

Well, it is actually possible to solve all the headaches with Android Emulator. When you install an emulator on PC, you get a virtual console in which you can use any Android apps and games. Today, I am going to share my experience of three popular Android emulators: BlueStacks, Andy and MEmu. 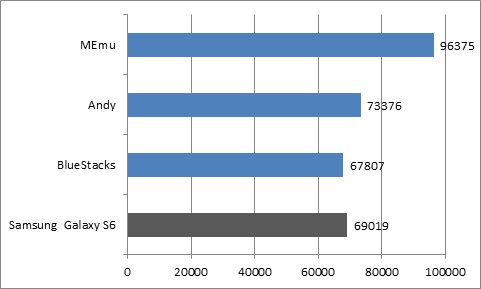 To my surprise, MEmu obtain the highest score 96375 and way ahead of the others. Andy's score is 73376 and BlueStacks's is 67807. MEmu seems pulls off this impressive performance by running Android apps natively on x86 processor whenever possible. On the other hand, when launching these three emulators, BlueStacks starts up a little faster than the others. I guess it's probably because BlueStacks is a lightweight solution which doesn't virtualize the full Android system.

BlueStacks is extremely easy to install and setup. In fact, there is very few things could be configured. BlueStacks has its own user interface apart from the standard Android interface. Frankly speaking, I am not a fan of this UI although it's particularly focused on games. The worse thing is BlueStacks costs $2 a month to keep playing.

Andy is not as simple as BlueStacks. I did have a problem actually installing it but somehow I fixed it. Once you launch Andy, you will get a standard Android interface and need to connect your Google account to Andy at the first time. Andy offers a handy feature that you can launch Android apps from shortcuts in your Windows desktop.

For MEmu, downloading and installing is amazingly easy. With the default setting, I can directly run any app exactly like it on the Android phone or tablet. I was also surprised that I can change the brand, model and even IMEI, and etc. Sometimes it's very useful, I bet you know that.

As you can see, BlueStacks concentrates more on games rather than regular apps, as its home page filled with suggested games by category reveals. Hence, it's no surprise that the suggested games run fairly well. Unfortunately, I found the program to be buggy and slow in some regular apps.

Unlike BlueStacks, Andy focuses on an overall experience for both games and regular apps. It actually plays the game better than BlueStacks in terms of stability, but sometimes a little bit slower. The good thing is that Andy supports third party launcher and even allows the use of widgets.

MEmu also provides a more rounded experience than BlueStacks. It puts all suggested apps and games in MEmu market, but seems most of them are popular in China. So I downloaded a few apps and games from Google Play and they all went very smoothly. One of the things I really like personally is the ability of comprehensive keyboard mapping, since it makes me play shooting game much better than in my Android phone.

The multiplayer mode is an innovative feature which makes it possible to run several emulators spontaneously. Instead of pushing other apps/games to the background, you can switch between them on the same computer screen. This is like having several phones for real-time multi-tasking.

BlueStacks and Andy don't support this mode natively, but it's said that you could create multiple instances of BlueStacks or Andy with the help of sandbox.

MEmu has a thoughtful design for this feature. The activation process is very simple and I was able to create several MEmu players in a few clicks. It’s also easy to customize the CPU occupation and RAM of each emulator was introduced. Moreover, it takes up much less resource, compared to sandbox solution. So MEmu wins it clearly.

BlueStacks offers a feature of syncing apps between your phone and the Windows app via a cloud connect app. Andy lets you use your Android phone as a remote control, mirroring the screen on Andy on your phone.
MEmu could be launched from a USB thumb without any software installation. With this portable version, you can easily plug and play and bring MEmu everywhere in your pocket.

There are many other Android emulators and your choice really depends on your needs. If you need something super simple that plays some light games occasionally, then BlueStacks may be a good choice. For most of Android fans, Andy and MEmu are definitely worth a try. They are both free and powerful. As to me, I will go with MEmu because of good performance and multiplayer mode.

Well, I will be happy to hear your choice or suggestion.

Buddy, it's a emulator for you to run Android app or game on your laptop or desktop. MEmu and Andy are totally free. Have fun!

I think I have to try MEmu, seems quite nice from the votes.

High recommend you to have a try, buddy!

I have never heard about MEmu, i will also try for my PC. let see how it works. i have never used blustacks because it always hang my PC. Now i have another option to try it out