We use cookies on our websites. Information about cookies and how you can object to the use of cookies at any time or end their use can be found in our privacy policy.
To the AndroidPIT homepage
Login
Linh Hoang
Forum posts: 2

We all hear about Android being a less secure, more vulnerable (or more accurate, malware) platform that attacks and steals data. This information is somewhat correct, but you should not be too worried about the phone you have in your hand. Inside Android, Google has integrated many features to prevent malware, if there is a little more attention from you, making sure our phone is safe is not difficult at all.

Why do people say "Android is less secure"?

Android is an open source platform, this is well known, but not so that it is less secure. Open here is simply open in terms of source code and processes and how the system operates, does not mean that everyone can fix it because the core is still held by Google. Opening does not mean that any software installed on Android has the right to penetrate into the kernel of the operating system to make you mess. In contrast, decentralized software and files are very clear, not want to run and run, what to open is open, similar to many other Linux-based operating systems being used by the world.

The "open" feature that we often mention when talking about Android lies in its comfort in the interface elements, file management, application installation resources, and competitors are directly compared. is iOS. This "open" has nothing to do with opening the source code. Look at Windows, it can do everything Android does, but it's still closed source. And the main problem we're discussing in this topic also revolves around this 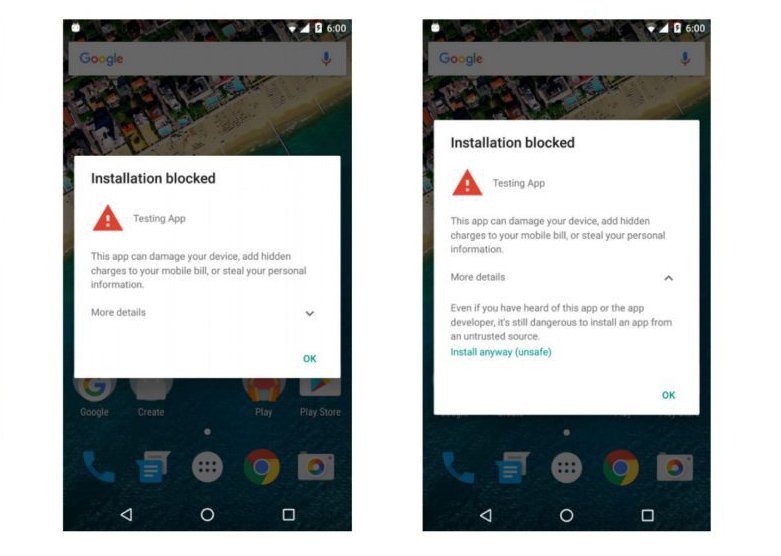 Among the factors that Android gives us comfortable intervention, the "source install" element is the source of many security issues. As you know, any Android user can install an app from Google Play Store - is an official app source and is carefully moderated, or you can install it directly from APK files - the format Run file for Android. Because Android can install app APK very easily, anyone can do it, so they are born third-party app stores, where the app is almost not checked thoroughly before letting users download (except for the store of Amazon) so a bad person can upload an app containing malicious code here and wait for you to download it.

Another way that is used to spread malware to an Android device is the way in which users install the app. Notifications "your phone has a virus, install app XYZ to remove" or "your phone is running slow, install app ABC to get it running fast" are the most common tricks of the hacker. Once you have downloaded the APK file containing the malicious code and installed it on your computer, it is new to know what it is doing and it is exploiting any security hole of Android to attack you.

Another problem that makes Android more vulnerable to attack than iOS is that the update time of Android is too slow, depends a lot on the manufacturer as well as the network. When Apple discovered a flaw, they immediately created a patch and released it to millions of users in a short time. Meanwhile, due to the heavy fragmentation, the Android update often takes weeks, even months, to users. That is the heavy holes that have just been patched like that, with lighter holes, the manufacturer does not set a high priority. Only Nexus or Pixel machines are quickly updated because of Google's "home chick", others also only have the newly patched high-end flagship. There are many old devices that are sometimes not updated.

But should be too worried?

Do not need. Google knows the nature of its operating system fragmentation, so it has come up with many anti-malware measures available in the platform, and any Android device will have the security features below. Of course they will depend on the Android version, I will tell you if the feature depends on the version.

Verify Apps also comes from its use of Google Play Services' information, a background service in Android that performs many functions, including a feature that helps Verify Apps detect malware. Google Play Services is updated very often so you can be assured.
3. The Android device is not rooted by default. Root is the highest access of all Linux operating systems, when the app has root access, it means it can interfere deeply with the system and do whatever it wants. Therefore, by default, no manufacturer has to root its device. We are often rooted by the brothers, do it by themselves. Without root, the malicious application cannot run processes freely, unable to sneak the camera, recorder or phone, nor can it spread to other apps.