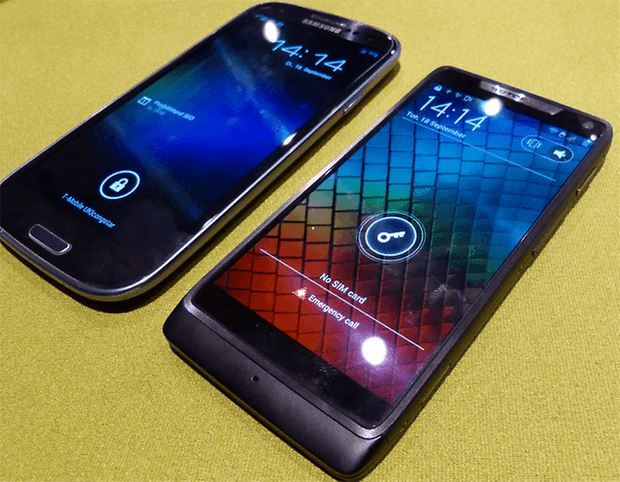 Yesterday, Motorola introduced the RAZR i and I must admit, I was a bit disappointed. After the hype died down, I realized this was a mid-level Android phone, not the revolutionary flagship model I was expecting. But no matter: in the end, the RAZR i is still a perfectly decent smartphone for the average, non-techie, consumer.

The i looks like typical Motorola RAZR, with a pleasing design made of high-quality materials. Plastic is a foreign word to Motorola, and the RAZR i brings the same Kevlar backing as the first RAZR Android device. And yet, even with such premium materials, the RAZR i manages to be even lighter than the Galaxy S3. The device weighs just .27 pounds, compared to the S3's .29 pounds. The RAZR i feels incredibly solid, like an expensive device. Quite frankly, the S3 looks cheap in comparison. In this respect, Moto deserves a lot of praise. 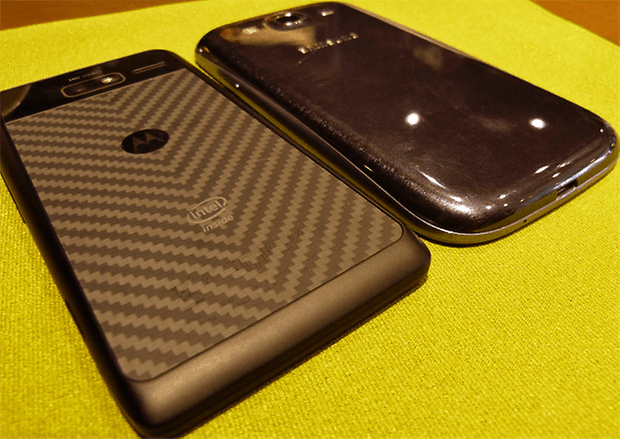 You can tell that Motorola's materials are top-of-the-line compared to those of the Galaxy S3.

I think, in retrospect, I should have been a bit more suspicious of Motorola's claim that they're releasing the world's first phone with an edge-to-edge display. No question, the RAZR i wastes very little space on the front display, but the top and the bottom still have plenty of blank space and the sides of the display frame are about .07-inches thick. That's not a whole lot, and it does make the device easier to hold in one hand without accidentally triggering something on the display. But it's not an edge-to-edge display, as marketed.

And there are other problems... 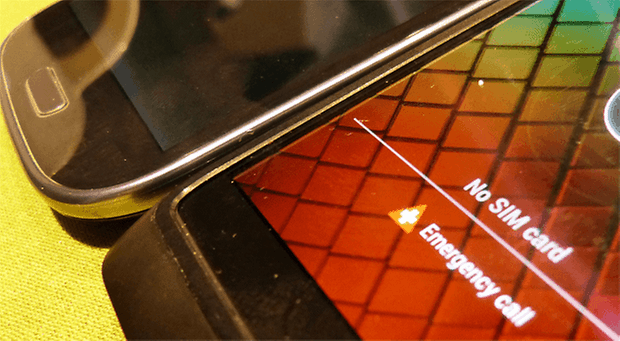 The recessed glass is a bit strange to get used to.

Motorola and Intel are especially proud of their ultra-fast camera. If you press down on the dedicated camera button, the RAZR i's camera starts up in less than a second and in is supposed to be able to take ten shots in as much time. Like a machine gun.

Personally, I'm not so interested in such things. I'm more interested in the camera's abilities; specifically how well it captures light and color. In the London cafe where I was testing this device, the Galaxy S3 beat the RAZR i when it came to capturing light.

The beating heart of the RAZR i is its 2480 Atom processor, part of Intel's Medfield series. It has just just one core, which could lead folks to dismiss it as a piece of scrap metal, but thanks to Intel's "hyper-threading" technology, the system can run two applications simultaneously, thus putting it more in the realm of a dual-core processor.

Optical illusion: the RAZR i appears thicker than the Galaxy S3. In reality, it just appears that way because its a narrower device.

And, if necessary, the chip can also speed up the pace, clocking in at 2GHz. "It's got more power than a Galaxz S2," said a Motorola rep. Mind you, he's not mentioning the S3 here; the goal isn't for the RAZR i to win first, but simply be able to compete in the market.

Motorola was also careful to highlight improvements made to the way the RAZR i processor JavaScript, which should result in much faster JavaScript execution, noticeable in the browsing experience.

This sounded promising, but I did not notice any improved performance. On the contrary, the decice shuttered a bit when pushed to the limits. But I believe this could be because I'm not using the final version of the software, so I don't want to jump to any conclusions just yet.

A final word about the compatibility of Android apps with Intel's x86 architecture. Intel claims it has already adapted 500 of the most popular apps to its chip, and the others should be able to run on an emulator. "Chrome in particular was a challenge, but we have handled it,"explained an Intel rep. What he emphasized was that Intel takes these concerns very seriously and that the company has the market power to achieve a high level of x86 compatibility.

But all the apps in the Google Play store? I think that's too big a task, even for Intel. Of course, much depends on what the future of Intel and Android looks like. Suffice to say, high sales of the RAZR i are intregal to the success of Intel's future in the Android world. 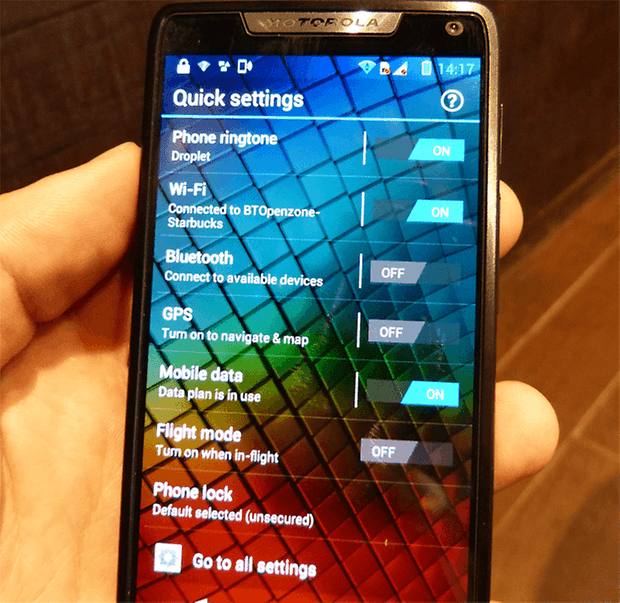 The beginner-friendly "Quick Settings" menu that appears when you swipe from left to right over the home screen makes it clear to whom Motorola is marketing the Razr i: the average Joe , not the geek.

We've now arrived at the last and crucial question: how can one categorize the RAZR i? It's certainly not the high-end flagship with the frameless screen which many were hoping for.

But if you consider the way the phone is being positioned in the marketplace, Motorola's strategy, at least, seems a bit clearer. The phone costs 399 Euros and it is expected to fall to 350 Euros shortly after launch. For this price, what is offered is more than good. The model may not appeal to technies and geeks but for the average joe who buys a new phone every couple of years and doesn't care about the processor, the phone delivers. It's got a premium, beautiful design, a powerful battery and a good camera.

I can live with that. Nevertheless, Motorola's greater strategy remains a mystery to me. I was invited to London with great fanfare, only to be shown a phone that hovers between "decent"and "good."But is it even better than the RAZR HD?

In my opinion, every manufacturer needs a flagship to show the world what they can do. These models form the backbone of most smartphone product lines. And all the manufacturers have a model out there which fits this bill – except for Motorola. In my opinion, this could be a real problem for them.

To release a phone in September with Android 4.0.4 is a disappointment. A Jelly Bean update is "in the works," but nothing's happened yet. But there was one nice surprise: At least Motorola decided to unlock the bootloader.