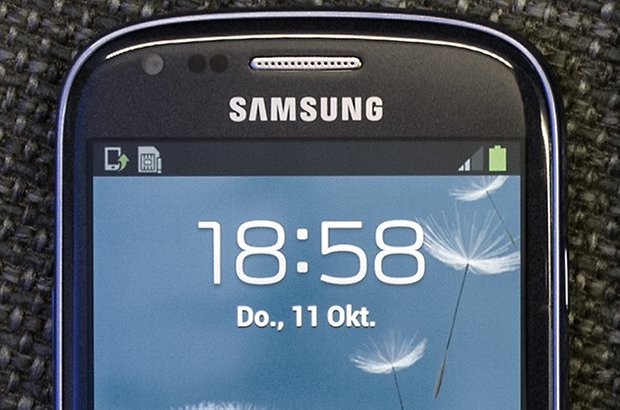 While I was on my way to the Samsung Galaxy S3 Mini event in Frankfurt, I couldn’t help but wonder whether the device was seriously worth the effort or not. Would the S3 mini really be the promised “sensation” that Samsung made it out to be, or would it just be another mid ranged device with way too much hype surrounding it? One thing seems already seems clear though: Journalists and tech sites labeling this device as an iPhone 5 killer are definitely wrong.

The show in Frankfurt Germany certainly didn’t seem worth the effort of traveling there. After Samsung’s German Manager Sunny Lee and Telecom Sales Manager Michael Shulz took the stage, photomodel Marie Nasemann appeared, followed by Samsung marketing chief Mario Winter and Product Manager Alexandra Zaddach (who simply talked about their past success and the beautiful Samsung Store located in a cathedral museum). They spoke 2 sentences about the actual device, and then opened up the floor for photographers to get some shots.

Luckily, I was able to grab a Galaxy S3 mini and get a closer look in a quiet corner. At first glance, it really looks like a Galaxy S3 that was shrunk after being washed too hot. But upon closer inspection, you can definitely see many differences. For example, the front facing camera and sensors are located left of the speaker, which is the opposite side of where they are located on the Galaxy S3. The info LED is also not nearly as bright as it is on the S3, and the home key on the S3 mini is wider. 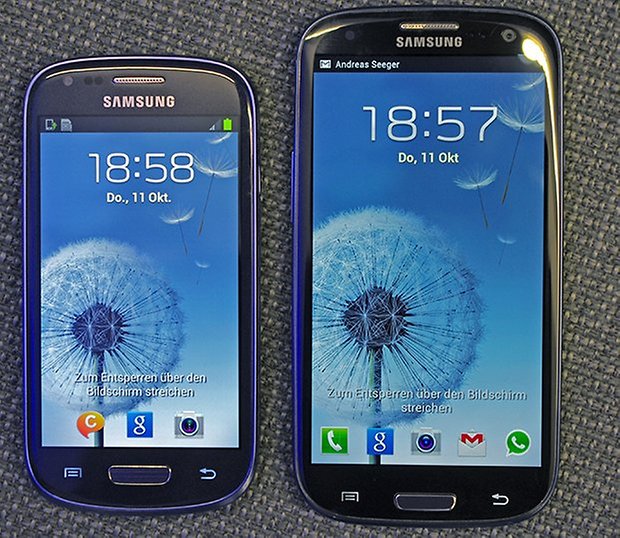 The Galaxy S3 mini and its 4 inch display is significantly smaller than the 4.8 inch S3 screen.

If you turn the S3 and it’s little brother over, the distinct differences are a lot more visable. Samsung has placed the LED light and speaker in different positions on the S3 mini than it did on the S3. The speaker on the back of the S3 mini is naturally a lot smaller than that of the S3.

The Samsung logo is printed on the mini, but not embedded as it is on the S3. The back cover is also inferior to that of its big brother, and sounded like opening a pack a resealable cheese when I opened it. 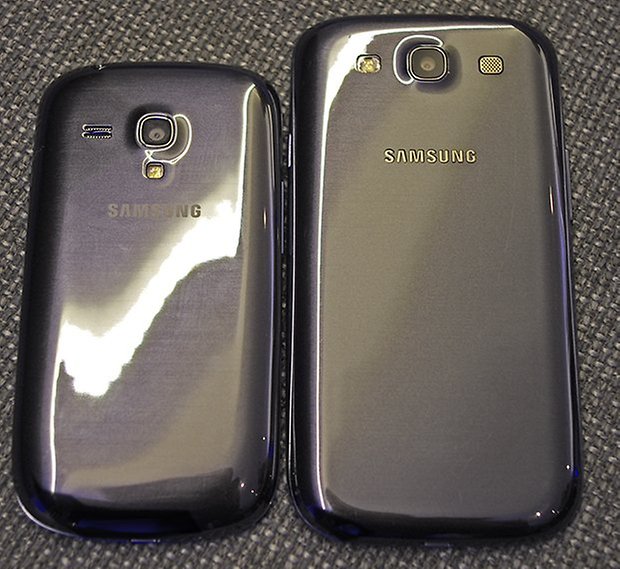 In the hand, the Samsung Galaxy S3 mini feels just as smooth and round as its big brother. It is noticeably lighter (111.5 grams for the mini vs 133 grams of the “heavy” S3), and anyone with tiny hands will most likely find that their thumb can easily reach any part of the screen. The Super AMOLED display is pretty damn solid, despite the relatively low resolution of 480 x 800 pixels, and offers pretty much the same beautiful contrast and colors as the S3. 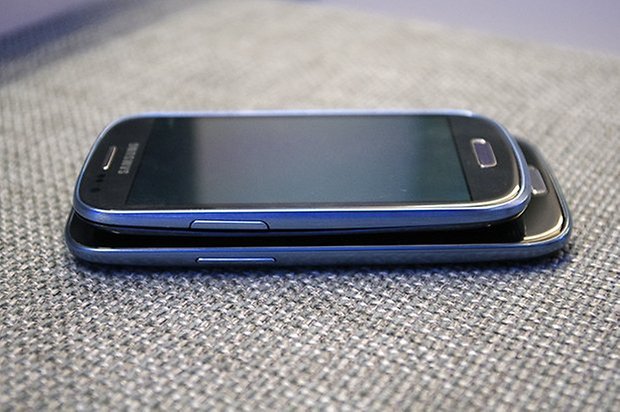 As expected, the major differences between the S3 mini and S3 are found on the inside. The mini packs a dual core (underclocked) processor, and the battery is much smaller, which probably won’t be a big issue when it comes to getting solid battery life in everyday use. A dual core 1Ghz CPU and 1GB of RAM certainly isn’t bad, and the CPU and GPU will have to work less (when compared to the S3) due to the devices lower resolution. 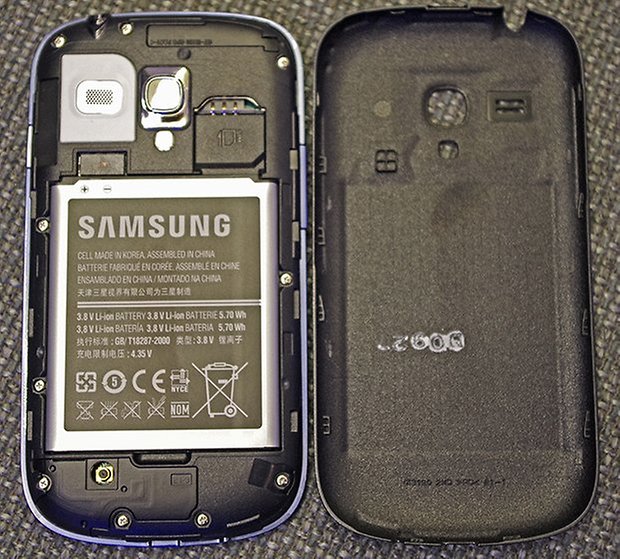 The inner workings of the Samsung Galaxy S3 mini

Benchmarking the device was pretty much impossible, and you could tell from the performance of the phone as it was being presented that it was an early prototype. Hell, even the wifi didn’t work. NFC was also a no go, and interestingly enough, it seems Samsung will offer one version with NFC for 439 Euros, and one without for 399 Euros. 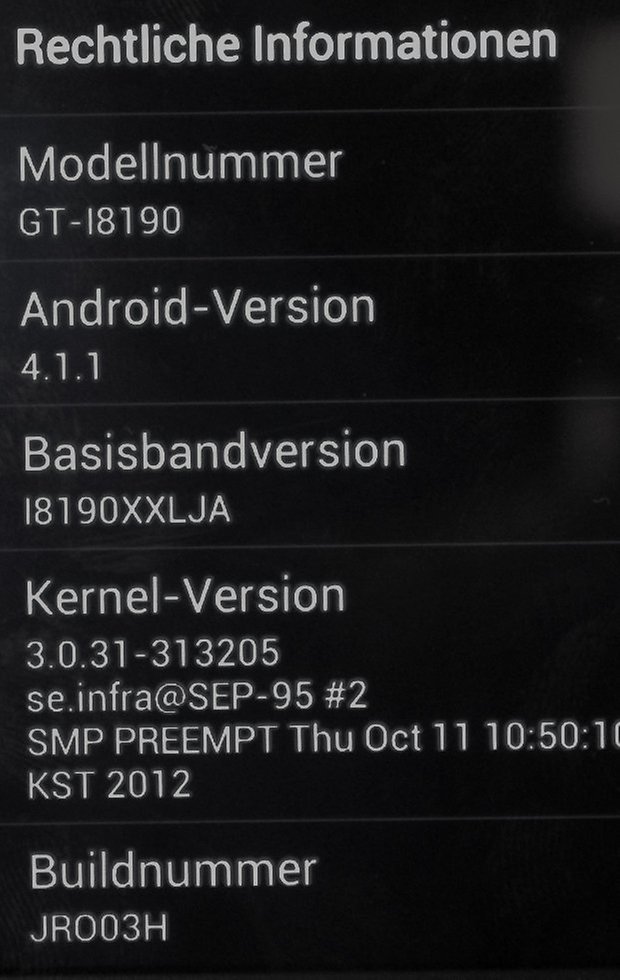 The Galaxy S3 mini’s much needed firmware update is yet to be announced.

The camera on the S3 mini did work, and I took the opportunity to snap a photo of 2 Samsung girls that were presenting the phone. The 5MP camera isn’t bad, and with the proper lighting conditions the images will most likely be acceptable....but not amazing. Luckily, the Bluetooth was working on the S3 mini, which allowed me to get the images I took moved over to my phone. Check it out: 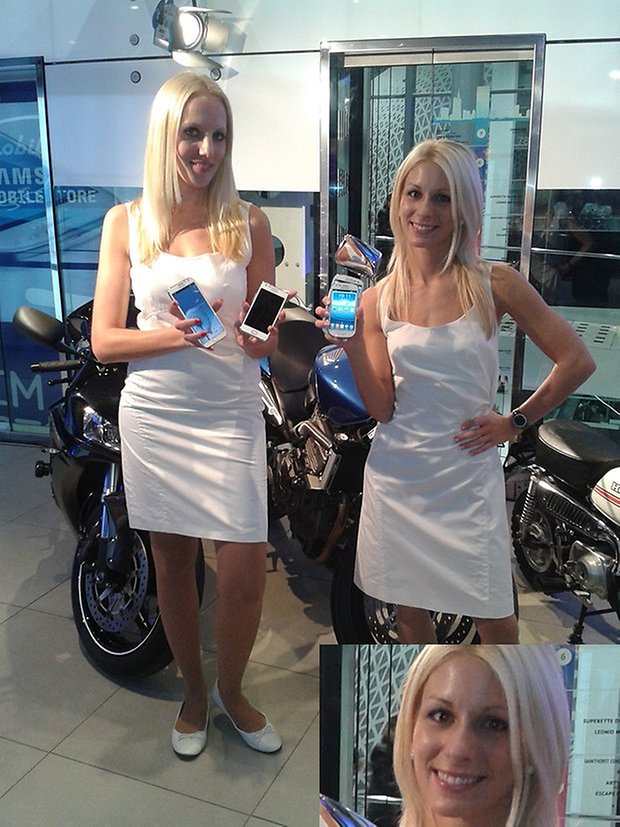 As you can see from the picture, Samsung likes offering everything in different sizes

A brief look at a prototype is naturally not a very meaningful test, but it is enough for me to already say this: If this device isn’t offered at a more competitive price, devices like the very similar HTC Desire X could be a lot more interesting for consumers, especially with its under 300 Euro price tag. As soon as we have the Samsung Galaxy S3 mini in the office, we will compare these 2 devices to show you what we mean.