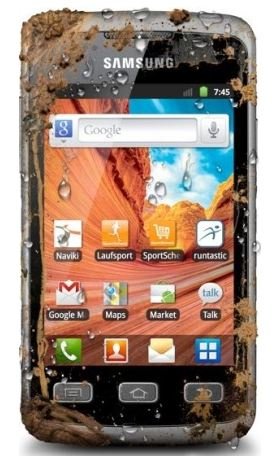 Samsung has arrived fashionably late to the rugged Android party, which now includes the Sony Xperia Active and Casio Gz'One. But, as they say, better late than never. The new Galaxy XCover promises to do all the things your average Galaxy can't, including being dunked 1 meter deep and holding its own against attacks of dust and dirt.

Xcover will feature Gingerbread, a 3.6" scratch-resistant display, a 3.2 megapixel camera with LED flash and 7.2 MBPS HSDPA. The phone will launch in Germany sometime this October, but no word yet on pricing or worldwide release date. Check out the full presser below:

Schwalbach / Ts., 9 August 2011 - With the Galaxy Xcover Samsung expands its range of rugged mobile phones for outdoor use. The device combines outdoor skills with the ability of a powerful smartphone.

Smart through social networking apps and running the Samsung Galaxy Xcover with the Android ™ 2.3 platform and is using apps ideally suit her personal needs. Provide wireless connectivity for fast n-standard, and an HSDPA connection with a transfer rate of up to 7.2 Mbit / s.

The Samsung Galaxy Xcover is available from October in the trade