It was a difficult introduction for Blackberry Messenger, but it has finally made its debut on Android and iOS for the first time. Well, first time if you don’t count the first attempt that Blackberry made to release the app. And so, we’ve jumped on board the BBM bandwagon and compared it to the Android fan favorite, WhatsApp.  Whether BBM is better or not and whether it can survive in a world littered with competitors, only time will tell but at least we can have a quick look a the messaging app in this comparison.

And so we fall back on the question: Who would want to compete in the messenger market when you have to take on the likes of WhatsApp and Viber and their millions and millions of users? Especially with the struggling Blackberry posting loses all over the place. However, despite everything, BBM is here and supposedly here to stay. And so, here’s a quick little breakdown between the WhatsApp and BBM and how they are similar and/or different. 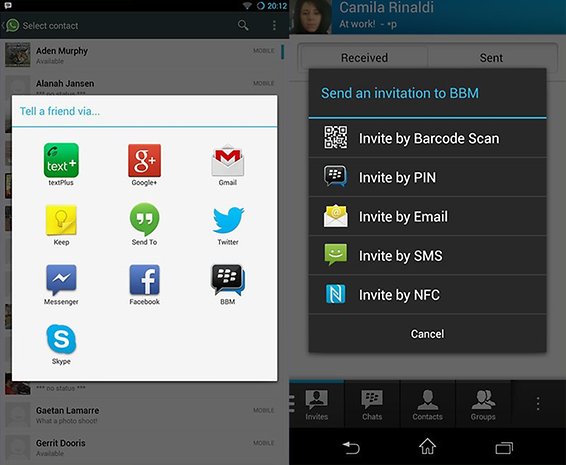 At first glance, BBM and WhatsApp appear to differ significantly from each other, but both messengers incorporate, at their core, the same functions and options. Whether BBM has enough in it to stand out from the pack, that’s for you to decide.

As I’ve said above, only time will tell to see how BBM fares in the Android and iOS market. I know just from personal experience, friends who have long stood by BBM are excited that their friends on other devices will be able to chat with them at long last with their beloved “messenger” service. Will that steadfast user base be enough to bring people over to try it out? I have a hard time convincing myself to make the change as I already have a good base of friends using WhatsApp already.

The greatest asset of the BBM is the management of groups and that may be the core strength behind it: concentrating on the student and business crowds. As well, you don’t sign in with a phone number and “lock” a device to your account, but rather use a BlackBerry ID which is e-mailed to you.

So, what do you think so far of BBM? Is it enough for you to make the change?