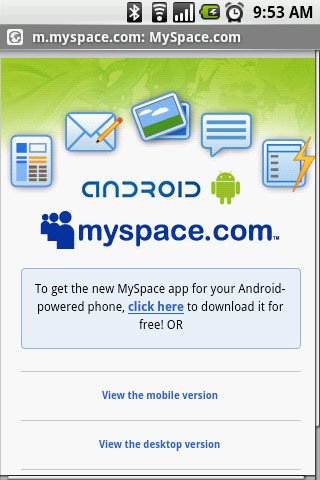 For those of you that thought Myspace was dead - think again! According to AndroidStats, Myspace ranks as the most popular social networking site on Android. Who could've imagined that! At a time when everything seems to be dominated by Facebook, Myspace seems to be gaining some ground on the Android platform.

This comes as a real surprise to me since I've stopped using Myspace as a social networking site ages ago. Apparently, Myspace has done a great job of adapting itself to Android technology and offers users a great-looking app. Here's what Scott Goldberg, a Myspace product manager, had to say:

Our deep integration with the Android platform is one of the reasons why we’ve seen a surge in usage. Unique to this app, we have three home screen widgets. One of them allows voice-enabled status updates. We also allow users to set MySpace photos as background wallpaper on their phone’s home screen. Close integration with the native Android camera contributes to the customized experience and makes it easy for MySpace users to take, upload and share pictures of their friends out having fun.

Although Facebook and Twitter has been extremely successful on iPhones and Blackberries, their Android application are simply not up to par with Myspace. I know that most people, myself included, only use Myspace as a site for streaming music and getting informed about upcoming shows. But maybe Myspace can make it big on Android devices, it can also bounce back online. The question is what will become Myspace's primary focus in the upcoming months. What do you think of Myspace? What do you use Myspace primarily for? Share your thoughts with us in the comment section!