We use cookies on our websites. Information about cookies and how you can object to the use of cookies at any time or end their use can be found in our privacy policy.
To the AndroidPIT homepage
Never miss a story with AndroidPIT via Telegram
Login
KrisBlueNZ
Forum posts: 6

I can't touch or drag in the far right 15% (roughly) of the screen.
It's as if the finger X-position seen by software is being clipped or limited. When I drag my finger into the inaccessible area, software thinks my finger is at the far right edge of the usable area, but it won't go any further rightwards.
The screen display is not affected; just the touch input.
The unusable area matches the application dock area when I was using Zeam Launcher.
This has happened twice now, both while Zeam Launcher was enabled. I can't remember how I "fixed" it last time.
I've uninstalled Zeam Launcher and the problem is still present. I'm trying Launcher Pro and its dock is also unusable (it's in the same area of the screen).
I've tried a power-cycle (remove/refit the battery),

Edit 2012-02-04:
Here's an image that shows the problem.
I drew a diagonal line with my finger, starting from near the bottom left corner and ending near the top right corner.
To start with, the line on the display followed my finger exactly.
As you can see, when my finger reached the "unusable" area at the right, the line wouldn't follow my finger rightwards, though it continued to follow my finger upwards. 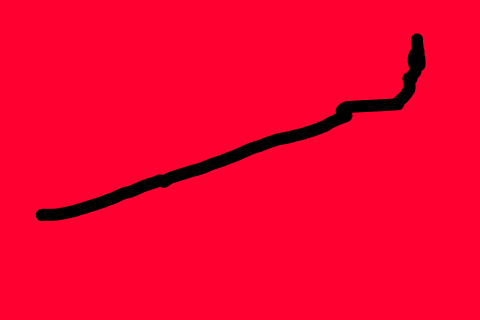 Thanks for ANY suggestions!

Hmm..could be a calibration issue. Give this app a try:

Works for all HTC phones. It could help if that is indeed the problem.
Reply
KrisBlueNZ
Forum posts: 6

Thanks for the response.
I don't think it's a calibration problem. I used the "paint note" function of Note Everything and the "brush" on the display follows my finger exactly, until I reach the start of the unusable area, when the brush stays at the edge of the usable area. I can move the brush up and down along the edge of the usable area, but not into the unusable area.
It seems to me that the finger horizontal position is being clipped or limited. I can see why that could be done temporarily, but the problem is permanent and survives a cold start.
I saw a "ts-calib" file mentioned in the article about the calibration program. I don't expect it will have any clipping/limiting parameters in it, but I'll try to find it and have a look.
Thanks again :-)
Reply
KrisBlueNZ
Forum posts: 6

Re the ts-calib or ts-calibration file, I can't find it.
My phone isn't rooted, so perhaps I don't even have read-only access to the file.
I was using File Expert which can access the phone's internal storage but perhaps not all files if I don't have root access?
Reply
Eric McBride
Forum posts: 1,811

I don't understand why I should check for dead pixels.
The display works fine. It's just the touch input that has a problem.

Here's an image to explain the problem better.
I drew a diagonal line with my finger, starting from near the bottom left corner and ending near the top right corner.
To start with, the line on the display followed my finger exactly.
As you can see, when my finger reached the "unusable" area, the line stopped following my finger.
It's as if the X-position coming from the touch detector is limited. The Y-position works fine.

Ah ok..i see what you mean...that is indeed a weird problem. I thought that maybe the pixels in the top upper right corner might be dead, therefore not properly registering the touch. I ve never seen such an issue, so your best bet might be taking it into where you bought it. If its really a screen issue, the screen, or the phone might need to be replaced.
Reply
KrisBlueNZ
Forum posts: 6

I don't think it's a hardware fault, since it happened before and I fixed it somehow. I suppose it could be though.
Thanks for your help
Reply
Eric McBride
Forum posts: 1,811

Let me know if you find out something! Im interested in what the problem was.
Reply
KrisBlueNZ
Forum posts: 6

It looks like it is a hardware problem after all.
Sometimes after a reboot, the phone will respond to touches anywhere on the screen, but it registers lots of phantom taps and drags in the right side of the screen. If I run a paint program, blobs and lines appear randomly at the right of the display when I'm not touching the screen at all.
Other times after a reboot, the right side of the touch screen doesn't respond to touch at all, but there are no phantom taps. I think the firmware detects a problem and "locks out" part of the screen.
I will be sending it back for replacement and I'll let you know how I get on.
Reply
Eric McBride
Forum posts: 1,811

Glad you got to the bottom of it. Keep us posted!
Reply
Recommended articles