We use cookies on our websites. Information about cookies and how you can object to the use of cookies at any time or end their use can be found in our privacy policy.
To the AndroidPIT homepage
Never miss a story with AndroidPIT via Telegram
Login
Andreas Vourkos
Forum posts: 8

As apps’ visibility becomes more and more difficult, app developers are working hard to make their apps stand out among thousands of new apps appearing every day. There is a big variety of articles out there on how to increase an app’s discoverability through ASO techniques, marketing campaigns and others. What is most important, though? Spend on ad marketing campaigns? Creating press releases, or dive into Google Play mechanisms to understand and position better an app on store? Anyone could argue that app developers should be doing all of that anyway…this is so true, but where should be their main focus?

By using a Pollfish, a tool that allows direct interaction and gathering of feedback from thousands of mobile app users instantly, the main challenge was to find and ask the right questions: How do you discover apps that you download? What are the most important things that you check before downloading an app?

In order to get an idea of possible answers from users, two surveys were initially crafted (survey1, survey2) and launched where users were able to enter their opinion on several open-ended questions around mobile apps. Answers from those two surveys were used later on, to create a bigger survey that went live at the beginning of March and got distributed to more than 3,000 Android users in US.

How do you usually find/discover the apps that you download? 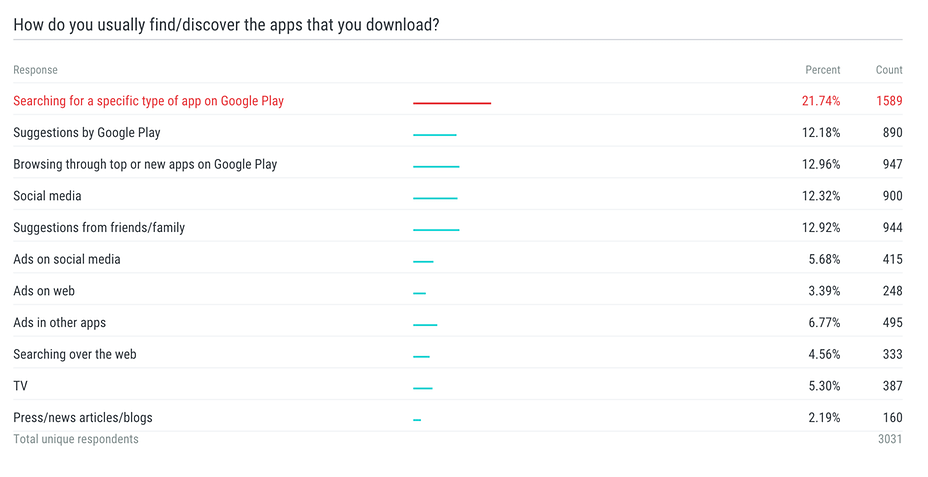 As expected, from survey responses we can see that being able to list an app higher on search results on Google Play or manage to get featured in top or new apps section, can give a great boost to number of downloads, since most of Android users are looking there when searching for new apps to get on their devices. In addition, word of mouth and social media can also make a difference, since suggestions by friends or family, and trends on social media can easily affect discoverability of an app.

What are the most important things you check before downloading an app?

Letting people discover an app is only the first step. When people end up on an app’s Google Play page, which factors affect their decision on choosing to install that app? 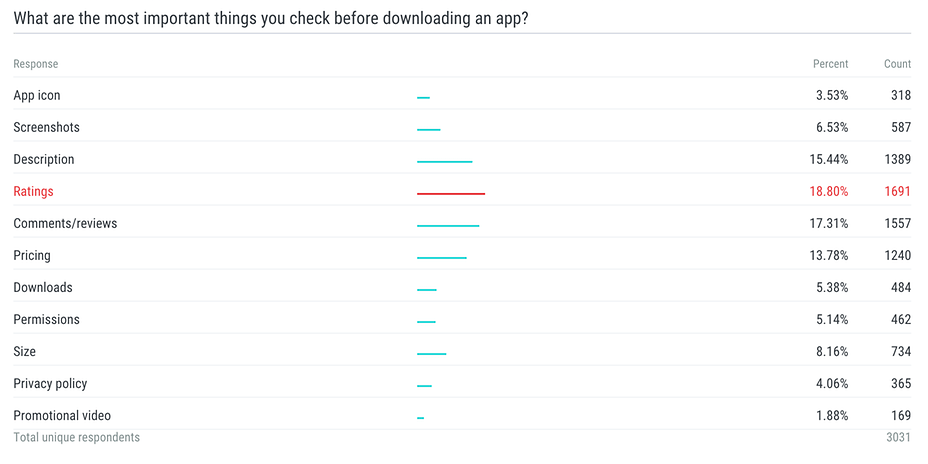 From what we can see, two of the most important things that users look into, are ratings and comments. What the community says about an app makes an impact and therefore being able to attract good reviews and ratings, affects the final decision of new users coming in. Moreover, it seems that drafting a good description that clearly describes what the app can offer can also help towards the download decision for an app.