The Nexus 5 is one of the most anticipated smartphones of 2013 and much like its predecessor, was created in part by LG. However, mixed into the competition for the Nexus 5 is also LG’s very own G2. While the LG G2 is considerably more expensive than the Nexus 5, should it be also considered as the better smartphone? Check out our comparison below.

While the devices might come from the same manufacturer, you’d be hard pressed to tell that from just looking at them. Three buttons dominate the back of the G2: the power button and volume buttons. The back itself is made of a glossy plastic with a subtle texture that gives a smooth finish. This is a stark contrast to the Nexus 5 with its rubberized plastic back. The Google smartphone follows the same design choices of the new Nexus 7: with simplicity being paramount and with the vertical Nexus logo and strikingly large camera lens.

The Nexus 5 housing is angular and rectilinear, with the back and sides being very minimally rounded. This impression continues to the front of the device with sharp and straight edges and the G2 having a much softer transition between the screen and the frame.

Both smartphones have brilliantly full-HD displays. The G2 screen is somewhat larger and as such, the pixel density is a bit lower but the difference is definitely not noticeable by the naked eye. The display of the Nexus 5 looks brighter at first glance, but that may just be because of more of a contrast due to the dark design of the other parts of the device.

The colors of the Nexus 5 are significantly warmer, with white colors tending to have a more yellowish hue. The G2's white, howeber, remaints more neutral and shows a direct comparison between what it is trying to contrast. It quickly becomes clear that the contrasts on the G2 are better, with dark colors and black showing stronger on the display.

The larger screen size on the G2 is definitely more noticeable and with smaller app icons on the screen, it appears to have more space and clarity.

The largest difference between the two devices is definitely found in the software field. The user interface of the G2 is playful and colorful, but LG is a quite a ways away from offering a pure Android experience on their device as it includes some manufacturer specific software and features. Not all are extremely useful, but some options have been well thought out and useful, for example, the ability to configured the navigation bar based on your own preferences.

For those of you who aren’t big fans of extra software included in with their device will be more attracted to the Nexus 5 mainly because of the pure Android experience. With the Nexus 5, you’re getting the Android 4.4 KitKat experience and all the features that are included in with it. I’d argue that the G2, however, offers a bit more in terms of extras and all that with an older operating system, Android 4.2.2.

Both smartphones have a Snapdragon 800 processor inside with 2 GB of RAM and an Andreno 330 graphics with the Nexus 5 coming in at 2.3 GHz and the LG G2 coming in at 2.26 GHz. With a close comparison in hardware specs for the processors, it begs the question as to whether running Android 4.4 has a positive effect on the performance or not? In the first performance tests, this actually seems to be the case in our first tests as we found the Nexus 5 would load pages faster in Chrome. Even when starting apps and loading YouTube content, the Nexus 5 was often faster out of the two.

Otherwise, there are no noticeable performance differences, such as stuttering or lagging, even when running graphically demanding games. Crashes or apps hanging that were reported by colleagues in other tests did not occur in yn of my tests. The market difference in AnTuTu (testing software) was most likely due to the fact that the benchmark was not optimized for Android 4.4.

One of the biggest criticisms of the Nexus 5 was that the camera is producing thoroughly mixed results. In addition to taking some pretty impressive shots in some of the tests, there was also a mix of duds. The G2 camera, however, was fully convincing during all camera tests that we performed. You can see the differences between the two in our direct comparison gallery. 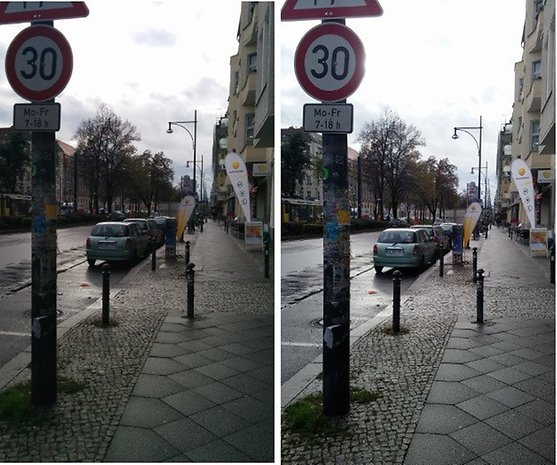 Both smartphones have an optical image stabilizer on board, but the G2 provided better results with it. The g2 provides better overall performs, faster and more accurate auto focus and consistently higher image quality. Also, the camera app is more robust and offers much more options. Whether you’ll ever need all the options, that’s another questions all together.

Another potential weakness of the Nexus 5 is the battery, which offers a capacity of 2300 mAh, despite the 4.95-inch display with full HD resolution. Our test model needed a few charging cycles before reaching full battery power. The LG G2 comes standard with a 3000 mAh battery inside.

Both smartphones were run in parallel for the battery comparison and were displays were turned to fill brightness while browsing WiFi, scrolling through menus and photos, playing some games, and using YouTube. After 99 minutes of use, the Nexus 5 was at 64 percent and the LG G2 was at 73 percent of remaining battery.

Apart from the camera and battery aspects, both smartphones are relatively similar and the differences between the two are almost miniscule. The bigger difference lies in the price: The LG G2 with 16 gigabytes of internal memory is over 200 dollars more expensive that the Nexus 5 16 gigabyte version.

The result is a bit mixed: the LG G2 is at the front of the comparison this time, but the advantage isn’t that clear in most areas. The Nexus 5 puts up a good fight and comes close in many different areas compared to the LG G2. The major weakness for the Google smartphone, however, is the camera and battery power found within. For those looking for a device and who place great important on the camera, software extras, and battery power should be looking at the G2, despite the added cost. For those who are Android purists and don’t mind a small dip in performance, the Nexus 5 is definitely suited for you.