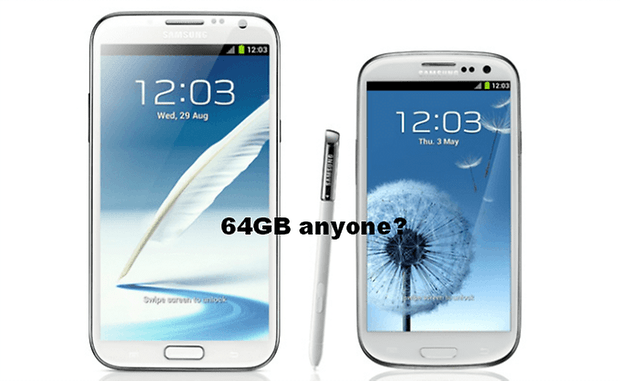 You read that right folks. I am going to show you an easy way to take your 16GB Galaxy S3 or Galaxy Note 2 (and a way for the Transformer Prime), and literally quadruple your INTERNAL memory (for installing apps and using as storage) up to 64GB. On top of that, you will even get to keep the 10 free gigs of internal you have left to give you a whopping 70GB total storage (64GB internal, roughly 10GB external). You guys think I’m joking, but I am not. The method for doing this is not only amazingly easy, but will literally save you hundreds of dollars on buying a device with more storage. So enough of my yacking. Let’s bump your 16GB up to 64 in literally less than 10 minute time. 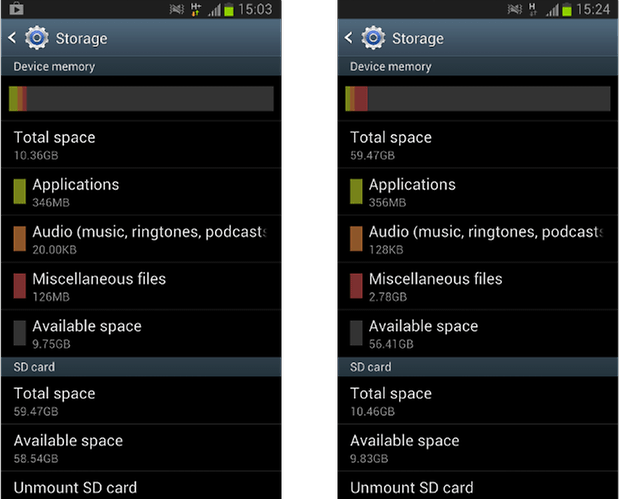 Notice anything odd about that pic? That’s right...my 16GB is now rocking ALOT more internal memory isn’t it? But how is this possible?

Now before you guys leave this article due to your fear of rooting, STOP. Let me put this to you as clearly as possible: Rooting the S3 or the Note 2 (and applying this mod) is so easy that it will quite literally make you wanna slap yo mama. I’m serious. Matter of fact, I did indeed slap my mother after applying this mod, but due to how awesome it is, she understood.

You know how to upload a photo on Facebook right? You press “attach photo”, search your PC for the picture, and then press the “upload” button right? I mean, 13 year olds do it everyday. Rooting these 2 devices uses the EXACT SAME PRINCIPAL. You open up a tool called Odin, navigate to a file you downloaded, and literally press the go button. DONE. Rooting complete. It can also just as easily be reversed, so have no fear, ok?

All the files you need to root the Note 2 are here, and to root the S3, they are all here. It takes literally 2 minutes guys. Once you have done that, you can continue with the mod.

So now you’re probably asking “how is this possible? I mean hell, buying a 32GB or 64GB GS3 or Note 2 costs ALOT of money! Surely it can’t be that easy to bypass the money you would have to spend by applying a simple mod?”. Well folks, it is that easy, and all you need is a microSD card and a rooted device...nothing more. All this mod does is the following: It fools your phone into thinking that your external memory is your internal memory, and vice versa. In a word: BRILLIANT.

The mod comes from XDA member mattiadj, who actually made it for the Galaxy S3 originally, and it just so happens to work on the Note 2 as well. BIG credits to him (and szymi22 for bringing it to the attention of Note 2 owners) for his awesome work. So now, lets get into installing it.

Keep in mind that this is only worth doing if you have at least a 32GB microSD card. I am using a 64GB card, and it works great. I personally recommend a class 10 64GB Sandisk Ultra card, which you can buy for about 50 bucks (here it is on Amazon, 32GB here, which is around 30 bucks). That’s just my recommendation though, and you can use whichever card you wish.

The simple method to apply this mod

So here we go. For the Note 2, all you need to do is the following:

The files on that thread should also work for the GS3 (they are even still named S3 files on the Note 2 thread), but just in case, the original S3 thread for this mod can be found here. He also includes a video tutorial.

When you reboot, you will find that your internal memory has increased, and that your “original” internal memory is now being read as your SD card. Now you can go crazy with installing as many big games and apps as you wish, along with pictures, movies, or whatever the hell you desire :)

On the Note 2, I have noticed that the only downside is that games and certain apps can take literally just a few seconds longer to load, but in most cases, I notice no changes whatsoever in performance.

For the Transformer Prime (thaks to developer TweakerL for creating this AMAZING mod), the method is a bit different, but will also bring you an INSANE performance boost due the hardware Asus used for the Prime’s internal memory. More info and the method for doing it on the Prime can be found here.

This is another huge reason why I love Android. Only with its open source system can mods like this be done. It’s easy, it’s very practical, iPhone users will DROOL, and you can remove it if you don’t want to have it anymore ( instructions for doing this are on the GS3 thread. Or you simply reflash your ROM to remove it). The benefits are HUGE, and I am filling up my Note 2 with all the games that I had on my Prime before.

So there you have it guys! This mod will save you a LOT of money, and will totally open up the possibilities of your Note 2, Galaxy S3, or Transformer Prime. Big credits again to XDA members mattiadj for this awesome mod!

P.S: Some points our commenters below reminded me of that I didn't include. For Transformer Prime owners, using data2sd will literally double the speed in terms of daily performance for your Prime. That being said, if you would somehow accidentally pop the microsd card out, you would need to reboot after reinserting it. There should be no data corruption due to the journaling used in the required ext4 partition that data2sd uses. The same hack for Prime exists using ext2 with NO journaling, which is double as fast as ext4, but the downside to that is that if the card pops out, your data will corrupt, and you will need to reinstall your ROM.

For Note 2 & S3 owners, I haven't tried popping out the card, but as its pretty damn hard/almost impossible to do anyway, it should not be an issue that a simple reboot couldn't fix if you did somehow manage to do it.

Picture credits: for the GS3 and Note2 - cdn.itproportal.com (edited by myself)

Top 10 Android 13 gestures to make your phone more intuitive
How to make your Android smartphone and tablet childproof
How to require approvals for kids' purchases on the Google Play Store
Liked this article? Share now!
Join the discussion

Oppo Find N2 review: The best is not good enough for US
No need for a case: Galaxy S23 will feature shatterproof Gorilla Glass Victus 2
Top 5 Android and iOS apps of the week